9. the first time you see each other

We all know that rule -- "you can't see other before the ceremony" and whether it's superstition or tradition...we all know, it's slowly fading.

It's nice to think "that BIG moment" the doors open, the crowd stands and boom....there's the bride. But the truth is -- the magic begins long before that.

Whether you are apprehensive about one of you actually showing up or the truth is, you just want to have that special alone time together, these days I think it's perfectly alright to have a moment before all the craziness of the day sets in.

My husband Jason and I really didn't see the need to hide from each other until that BOOM moment. We had been living together for over a year and spent nearly every night together...it would have been unusual to NOT spend the night together. We did keep some of the tradition though...when we awoke in the AM we kind of "avoided" each other while I got showered and dressed to leave for the salon and then it was the sweetest kiss as I left to get my hair and makeup done.

Once that was over and we both arrived at the hotel we really didn't see each other despite being 3 suites apart on the same floor. (hehe)

The moment where we actually first saw each other was when we met in the lobby to sign the Ketubah about 45 minutes before the actual ceremony. He was all dressed-up nicely in his tux and...in my best friend's 8th graduation white dress - don't judge me...I was so over spending money, still wanted to have the small element of surprise with my awesome Maggie Sottero dress.....anddddd completely forgot about it until the week of.

First it was this... 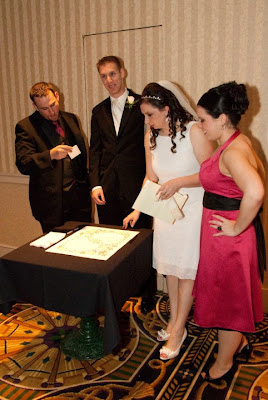 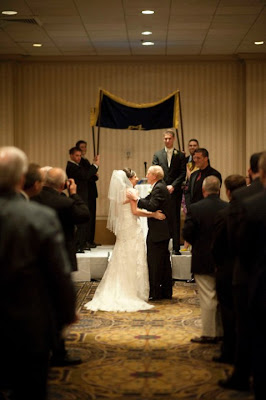 both photos by: Lewis Rinaman Photography
Other couples plan with the photographer a photo session prior to the ceremony to have a "big reveal" moment - which to most, is just as special. Personally, I still like that moment when the doors open of the ceremony and he sees you in full-dress for the first time...but avoiding each other COMPLETELY from the night before until the ceremony doors open is a little ridiculous...a small moment together may be something you cherish the MOST.
Posted by Sara