Over this past weekend, the 1,900 guests invited to the Royal Wedding of Prince William and Kate Middleton went out. The invites are printed in royal gold lettering on 10" x 6" white cardstock with gilded edges. The emblem at the top belongs to Queen Elizabeth. The queen herself addressed invitations to 40 other foreign royal figureheads, including dignitaries from Spain, Sweden, Norway, Denmark, and Greece. 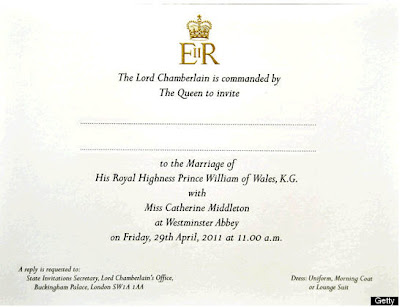 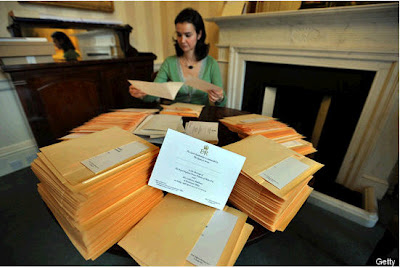 
Britain's Sunday Express newspaper reported that footballer David Beckham and his wife Victoria are on the royal guest list. William worked with Beckham on England's failed bid to win the right to host the 2018 World Cup.

In a statement, William's office insisted it would not disclose details of individual guests. Royal officials also declined to confirm reports that William's aunt, Sarah Ferguson, the Duchess of York, won't be invited.

"I think what this tells us is that they are a very traditional couple," Vickers said. "It strikes me as an entirely sensible and predictable type of list, looking to balance the need to invite all the people who should be there -- because William will one day be king -- with inviting those who they want to be there."

As for the rest of England, they will be able to head to the capital's streets and watch Kate arrive at Westminster Abbey by car and millions more anticipated to watch the ceremony and celebrations on television.

Or you can get a job there. Recently, Queen Elizabeth posted two new jobs on her web site - a General Assistant in the Coffee room and a General Assistant in the "wash-up" department.The dish-washer must maintain "the cleanliness of the staff restaurant and wash-up areas" while the other employee will be in a team responsible for arranging trays for tea and coffee and breakfast with "the correct glass and porcelain".

No invitation for me yet...maybe I'll apply for the coffee room assistant...I do love coffee.
Posted by Sara