45. The Alternatives in Bridal Shower Gift-Opening

If every bride and every groom who gets married gets the choice to customize and stylize their wedding receptions, colors, flowers and everything else...it only makes sense that a bride gets to have some type of say in some aspects of her bridal shower. And regardless of the strides in customs and traditions we've made...somehow the bridal shower or what's expected of the event...remains the same.
1 - Has to be a surprise (or at least where I'm from)
2 - Invite most women on the wedding list
3 - After briefly, and I mean very briefly, eating some of the food...the bride is then expected to sit there like a china doll and open each and every present, smile and show it to everyone...and if she dares to speak out against this part, the women at the party wish the wrath of Lucifer on her. 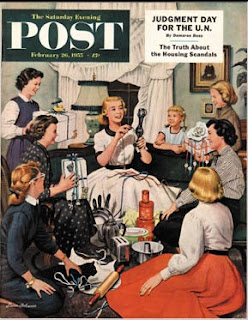 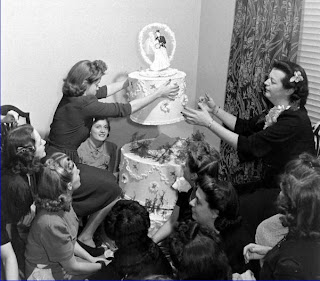 Image via
Just kidding...but seriously, a bride who doesn't like this tradition, is often overruled....and being a bride who had to do this...it's not exactly fun. First request, I'd like a Miller Lite...then I'll open these gifts.
Don't get me wrong, my bridal shower was absolutely amazing...but the idea of opening presents in front of like 50 people, made my stomach flip.  Some people love it - while others shy away from that. And almost every response of finding alternatives to opening gifts - or not at all, is met with the same answer "then decline to have a shower" which honestly, I think is the wrong attitude.
But I'm not just ranting as a bride, and I've been to my fair share of a bridal (and baby) showers as a bridesmaid and guest, and the time that it can sometimes take to open all the gifts can be wearing on the guests as well. I'd rather have 10 minutes face-time with the guest-of-honor then 2 hours of watching her open gifts.
And maybe I can't turn back time, but I hopefully can help brides-to-be turn this part of a shower that some dread into something more positive.
Here are some ideas to shoot to your bridesmaid and the others who have a hand in your shower.
The simple truth is some people expect you to open the gifts...and all of them. And some people will get offended if you don't open their gifts, so if you choose an option where you aren't opening all gifts...be prepared for that. It is a bridal shower thrown in your honor, people put time aside for this event and bought you a gift. BUT if a bride is having anxiety about opening all the presents, or there are a ridiculous amount of gifts to open...one of these other choices can be a nice option.

I've been to showers where the bride has taken around 2-3 hours to open presents, showers that have put me to sleep because they're boring and I've also been to great showers where I'm kept involved with the gift-opening.

Hey readers, do you have any alternatives to bridal shower gift-opening? Or do you think you should stick to the rules of tradition and do as those have done in the past? Let's hear it.