83. Will you be my bridesmaid?

Spotted: super adorable "will you be my bridesmaid or maid of honor?" cards at Target! I was in Target the other day and saw these and thought they were super cute! It makes for a great keepsake and makes asking someone to be in your bridal party slightly more creative!

Check out your local Target!! 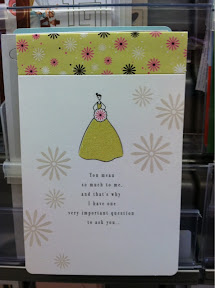 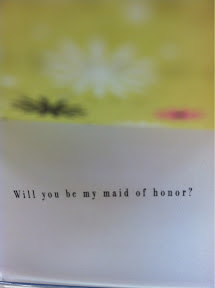 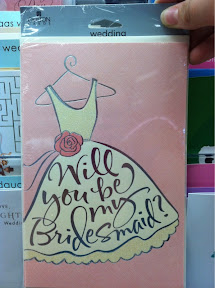 - Posted using BlogPress from my iPhone


So after I posted about Priscilla of Boston I got an email from my dad about my awesome mom wore a Priscilla dress on their wedding day in June of 1969!!! 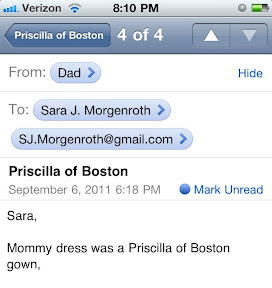 And then he sent me a photo of her... 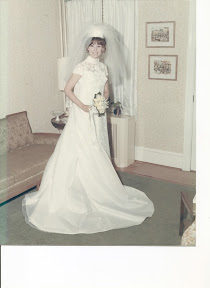 - Posted using BlogPress from my iPhone

As I mentioned earlier this week, Priscilla of Boston will be closing it's doors as of December 31st of this year...forever. After 65 years of awesome dresses, the store is going out with a bang. 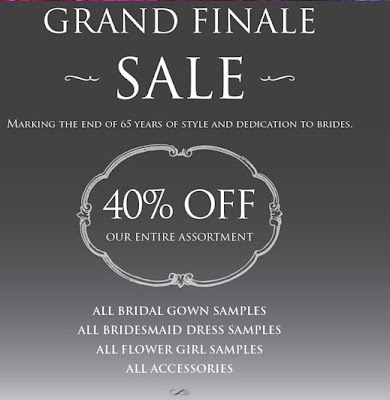 It's being shut down by it's parent company to focus on the ever-hated...I mean...whatever - to focus on David's Bridal whose overwhelming success with their Vera Wang line has made it the clear line and stores to focus on.

And I mean, the line is gorgeous -- I fell in love with one of the bridesmaids dresses but if you've ever seen a Priscilla of Boston dress...well, you get the picture. 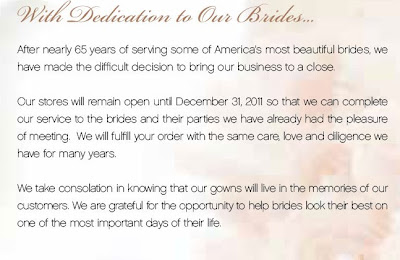 The company said it will fulfill dress orders that have already been placed. It will also continue to sell the sample dresses in the stores, but it will not take new orders for custom dresses.

OneWed couldn't have said it better.

We've always adored the gowns created by Priscilla of Boston, and can't say we're ready to see this brand go. But on the bright side, for 2011 brides wearing this designer, there will be an extra bit of nostalgia attached to their walks down the white aisle. And after Priscilla of Boston brides have said their I Do's, they can hold onto their gowns until they're bona fide heirlooms, and pass them down to future generations or resell them to deserving future brides.

Have you heard about what "Hear Comes the Bride" did? It's terrible.

"Someone capable of such hatred has no place in an industry built on love,"
A New Jersey bridal salon called Here Comes the Bride - is getting slammed in the media and on online reviews...but not the kind they wanted. They are making all the news because they refused to sell a dream wedding gown to a lesbian bride. Hmmm....last time I checked it's 2011, not 1954. 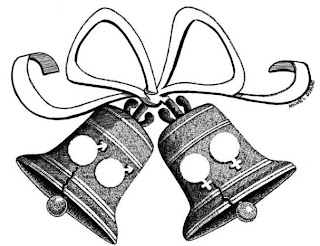 image via
In this economy where tomorrow isn't guaranteed you would think that stores would saddle up and go with the flow, but apparently this salon just shot itself in the foot.
Alix Genter told ABC News her own account of the story...

"She said she wouldn't work with me because I'm gay," Genter told Philadelphia Daily News columnist Ronnie Polaneczky. "She also said that I came from a nice Jewish family, and it was a shame that I was gay. She said, 'There's right, and there's wrong. And this is wrong.'"

The whole situation started when Genter crossed out "groom" on the form and wrote "partner" - that's what the owner called her to question this "mistake." And in truth - she should be able to put whatever she wants.

Since this story broke last month, Here Comes the Bride Yelp and Facebook pages have been covered in reviews - mostly negative - with outrage of how they treated a paying customer - who happened to be gay. Not to mention the "Boycott Here Comes the Bride" fan page. People are pretty mad and I can't say I blame them.

It is my hope that Genter can get passed this awful situation and have the wedding of her dreams with the love of her life...because anyone who is treated like this certainly deserves it. Sometime soon all will be able to freely marry...let's just hope we get there sooner than later.

I think it's safe to say this was not a good PR move for Here Comes the Bride. Yelper Donna B. wrote "Someone capable of such hatred has no place in an industry built on love," while S.J. chimed in "This business is no different than the places that turned people away due to their race 50 years ago." More to the point, however, Doug R. said: "In an economy where it's hard to find new business, you had the perfect opportunity to really increase yours."


As I said on DDOW's Facebook page earlier Priscilla of Boston is going out of business at the end of 2011 and they have currently put all their stuff on sale for - get this - 40% off !!!!!!

All I can say is wow knowing how gorgeous their dresses generally are.

I will have more information for you as I research into this amazing alert!

PS I love blogging sans computer!!! What do you think? 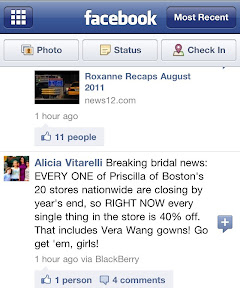 - Posted using BlogPress from my iPhone -