Planning a wedding requires a plethora of details. After all the excitement of finally getting
engaged to the man of your dreams the realization of actually planning the wedding sets in.

Now, for most women, this planning has started long before the boyfriend gets down on one
knee and proposes. Women like to discuss the wedding details with their friends and describe
what they want. With sites such as Pinterest, Instagram and all the other apps on our phones, it
becomes easy to screen shot and “pin” things you want in your wedding.

Although it is easy to create this virtual vision of your wedding, it is a whole other story to sit
down and plan out all the details. Some of these are broad such as the date, dress and location,
but there are also the more intimate details such as the colors, themes, guest list and financial
budget.

Jessica Feon was only 18 when she got engaged and planned her wedding start to finish in six
months.

“The whole thing was stressful but the most stressful (part) was probable just organizing
everything,” said Feon. “There were so many phone calls to make and so many people to touch
base with. I made like three wedding related phone calls a day for four months straight.”

Feon suggests keeping a detailed notebook with checklists to keep things organized. Make a list
of what needs to be done and who needs to be called. After you have done something simply
check it.

“When I checked them all off I was done for the day,” said Feon.

Another common stress is the financial one brought on from planning a wedding.

Tracy Henn found the finical burden of a wedding to be the most stressful. Henn already had a
home with her fiancé and had a young child with him so she cut out some of the costly parts of a
wedding.

“I went with silk flowers instead of real ones and I made my own invitations to save some
money,” said Henn. “We also decided to have a private beach ceremony to spare the cost and
then had a get together when we came home with close friends and family.”

There are ways to organize your planning to keep from stressing and smart cost effective
decisions that can be made so you can still have the things you want without going overboard. 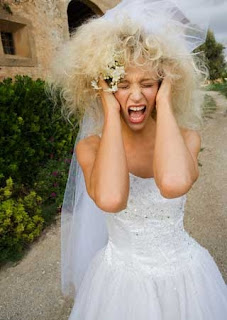