As parents, or soon-to-be parents, we do our best to try to make decisions that will allow the healthiest possible outcomes for our children (or at least try not to do any long-term damage).  There are a lot of choices out there.  Do you breast feed or formula feed (which we can discuss at a later time)?  Do you give your child store-bought or homemade purees?  Do you try to buy organic food/grass-fed meats/etc?  How can I avoid BPA like the plague?

One thing that has been a hot topic over the last few years has been food additives, in particular the addition of food coloring into foods and drinks.  As someone with a soon-to-be 3-year-old and a new peanut on the way this one is of particular interest to me.

I mean sure, we adults have probably been ingesting a large quantity of food colorings our whole lives and we turned out okay, right?  Maybe.  But have you ever thought about whether or not the food coloring was needed or even helped the product at all?

Recently, while taking a dietary supplement, I was reading the bottle and noticed the following ingredients on the list: FD&C Red #40 and FD&C Blue #2; and a question came to me “Why on earth would it be necessary for a dietary supplement pill to include coloring?”  Yes, this pill is intended to look a darker red color in order to resemble a particular fruit, but why would that be necessary? 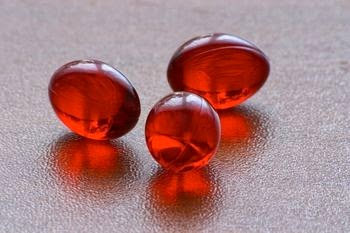 Is it assumed that you would believe it worked better if the pill looked more like the fruit it was intended to mimic?  Did the manufacturer feel it was necessary to cover the apparent inappropriate color of the ingredients themselves?  Was the pill that unattractive prior to adding the food coloring?
One thing I have never understood and always wondered regarding food coloring is the need to hide what food actually looks like.

In nature we have some pretty attractive food and some pretty unattractive food.  I’m not sure who looked at lobsters, crabs, and other sea creatures and though “that looks like it would taste great” but I would like to thank him or her personally.  Who looked at a potato and said “if I wash this thing off and cook it, I bet it would taste delicious”?  It’s because of these naturally occurring Ugly Bettys that I really don’t understand food coloring on its own.

But let’s look into this situation a little.  A dietary supplement is clearly NOT the food itself.  If I wanted the food itself, I would go and eat that.  That is not why I have purchased said pill.  I did so because I believe the quantity of the nutrients that I need could be more easily got by ingesting this pill rather than ingesting the number of fruits that I would need in order to get there.  Lazy?  Yes.  But I’m going it for my so-called health so back off.

So why add food coloring to anything?  Is it because the original product, without said food coloring, is considered undesirable?

Let’s go along with that line of thought.  Try to think about one of the most popular candies in the U.S., the Snickers Bar (sorry if you are reading this before lunch).  Now, according to the ingredient list from the Snickers website Snickers do not include food coloring (they do however included artificial flavoring which is a rant into and of itself, but I digress).  No food coloring for Snickers.  That makes sense, why would a Snickers need food coloring?  It’s covered in the most delicious ingredient available across the globe… chocolate.  But have you ever noticed that a Snickers looks like a giant poop?  Think about it (and again, sorry if you are ready this before lunch).

You know I’m right.  There aren’t tons of pranks using this candy as a stand in for no reason.
This candy bar that many people can’t say no to actually resembles something foul if you really think about it; as do a lot of our chocolate-covered friends.
image via

But… the Snickers does not need the help of food coloring to trap its victims.  We, as a society, have looked past the strange coincidence that this candy looks like something incredibly unappetizing, have eaten them by the case-full, and have enjoyed every minute of it.

So if the Snickers does not need food coloring, why do my cranberry pills need this dye?  Beats me, but now I know to pay more attention to the ingredients of all the things I buy and not just the foods and drinks that we purchase.

You will note I did not go into the controversy surrounding food coloring as that would require a lot more research than my 9-month-pregnant brain can handle at the moment.  Maybe we will tackle that topic and more serious ones after the baby arrives.  I just wanted to bring attention to something that might be getting forgotten in our quest to keep our family healthy.

For a list of FDA-approved color additives, please go to: http://www.fda.gov/forindustry/coloradditives/coloradditiveinventories/ucm106626.htm

Also for more information on food additives and the FDA’s overview on them, please go to:http://www.fda.gov/food/ingredientspackaginglabeling/foodadditivesingredients/ucm094211.htm